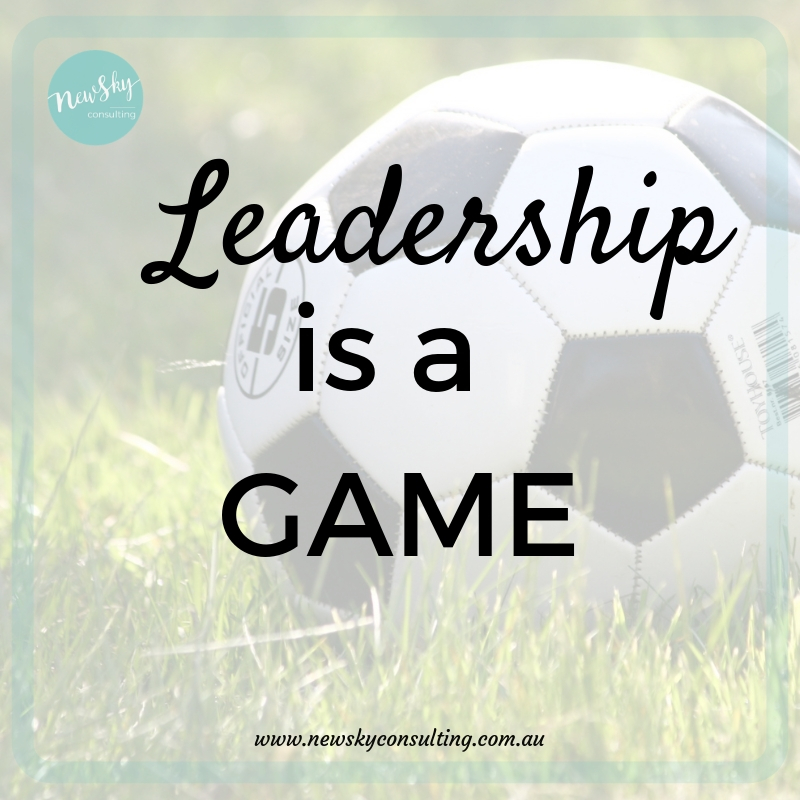 Leadership is a Game Connected Leadership is a Game

Every great team is made up of not just talented, motivated and committed individuals, but of individuals who apply their leadership of self in a way that adds value to the work of the collective group.

Bill Beswick, the Author of “One Goal”, and renowned performance psychologist and mental skills coach with a wealth of experience for elite teams, including the English Premier League and high-profile teams like Manchester United, says that:

“The power of a strong, collective team mindset is based upon the conviction that every single player can be trusted to carry out his or her responsibilities”.

It was watching my son play in his U14 soccer team in their semi-final that I reflected back on the first pre-season game of his team and thought about how far they had come, and that quote.

In the pre-season game, they were just a bunch of teenagers that really didn’t know each other, and had never played together in a game of soccer before. And it showed.

There was very little passing of the ball as individuals relied only upon themselves to advance the ball. Game strategy was non-existent, and communication was lacking.

In today’s game – the semi-final – I noticed how they each knew their positions, roles and strengths.  They played to their strengths, knew the responsibilities of their positions, and they trusted each other to deliver.

The connection between the players as they worked cohesively together and the difference it made to their performance was staggering.

Trust was high, as the ball was passed from one player to the next, knowing that they would be there to receive the ball. The Coach gave encouragement and support from the sidelines, acknowledging effort, and providing strategic direction.

It was obvious that each individual had developed their self leadership and recognized the strengths of others in their team.

This level of taking personal responsibility, utilizing individual talents,  with each team player stepping up to the leadership role when the game required – whether it be from the front, middle, back , or sidelines –  built trust, cohesiveness, comraderie and ultimately, high performance.

Leadership is a team responsibility.

It requires individuals to become self aware, and aware of the perspectives and strengths of others. It is the ability to utilize the individual talents and strengths in a dynamic way, that creates momentum and action for the greatest possible impact.

Connected leadership is a game and we are all players in the game.

It doesn’t matter who you are or what position you play you are a leader.  You are a leader because every time you get passed that ball you:

The advantages of taking leadership with the ball is that you become a team player. Not only is the team relying on you to do your role to the best of your ability and utilize your individual strength, they’re relying on you to know when to pass them the ball so that they can use their personal strengths and abilities for the betterment of the team.

Together the team relies on each other, and they know that when they trust each other they can put themselves in the right position, in the gap, and that the ball will be passed to them at just the right moment.

It’s about unity, strength, collaboration, trust and knowing where you have the most impact and where your team members can have that impact as well.

When you don’t have a team where everyone takes personal responsibility and leadership in their role, you have chaos on the field.

People in the wrong positions, passing the ball to the opposition rather than their fellow team mates, no communication and a Coach on the sideline pulling his hair out.

It’s like watching kids play their first game of soccer, where they just follow the ball around the field in a clump, rather than placing themselves strategically on the field.

The most productive and effective teams are made of individuals playing the game of connected leadership.

So you’re probably wondering how my son went in his semi-final??  Well, while his team played like a dynamic and cohesive team, they were defeated 2-1 in a game that went down to the wire.

Even in defeat they showed leadership in the way they conducted themselves after the game – support, comraderie, respect, reflection and congratulations to each other for what was a great game.

Leadership at its best.

Book your free clarity session or reach out today