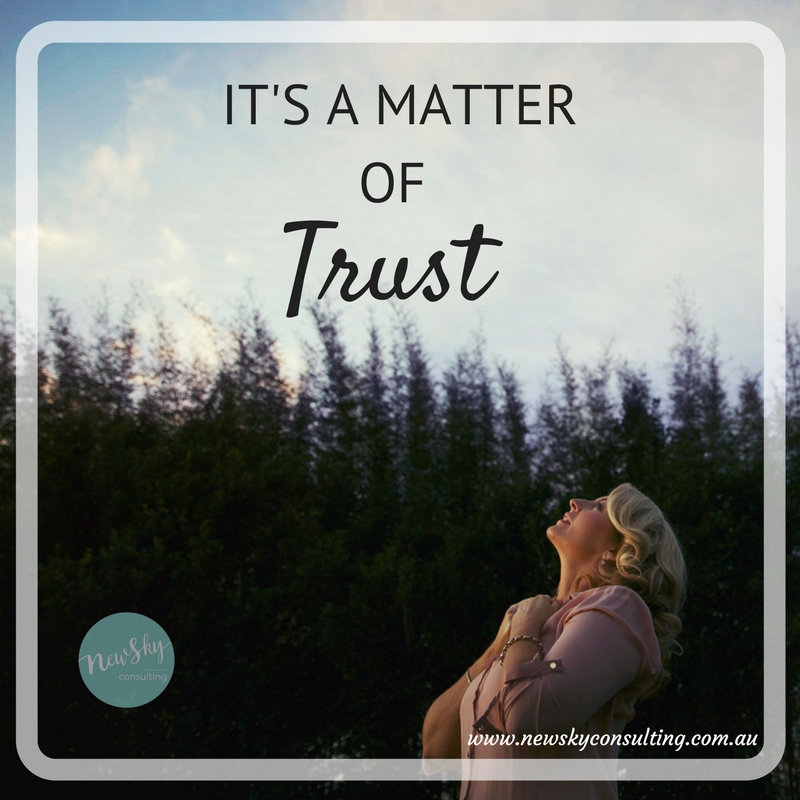 Not-for-Profits – Its a Matter of Trust

The biggest issue in our not-for-profit and community sector is not lack of funding or resources – but a lack of TRUST.

Trust – reliance on the integrity, strength, ability, surety, etc., of a person or thing; confidence.

I have observed the wearing away of trust in my NFP sector over the last 15 years.

consultation – a meeting for deliberation, discussion, or decision.

There was a mutual respect and an understanding that we needed each other, our communities needed the different offerings and services we provided.

We spoke and engaged with each other in a “telling of what was going on for us; a sharing of information”. People used that information in their own organisation/department or agencies to inform their next action

Through this we were building trust, developing relationships and identifying how we fit within the realm of our environments, relative to each other, and the communities in which we served.

You could feel the anticipation and the growing sense of “community” about how we affect each other, how we differ, and how we were alike.

Soon enough, by the early 2000’s we moved into a phase and relationship of collaboration.

Trust was established; relationships were good because the trust and valuing of each other was present, which resulted in a relationship of collaboration – working together to achieve greater value for the greater good and the greater whole.

Along with trust there was a great sense of hope and a high sense of community, that we could co-exist.  In fact, we needed each other and our communities flourished with the diversity that existed.  The relationship between service provider and government reflected this also. They were an important part of the collaborative relationship and sense of community – they were active participants in collaborations and joint activities.

Some years later collaboration evolved into a model of partnerships.

Partnership – the state or condition of being a partner; participation; association; joint interest.

Collaborative relationships continued to thrive, alongside the development of mutual and meaningful partnerships.  Service providers developed functional and value adding partnerships that provided mutual benefit to the organisation, the client base and the community in which they operated.

The relationship with government and funding bodies also took on a partnership focus, as reflected in the language in agreements and interaction with service providers.  Governments saw themselves as working in close partnership with the community sector, and recognised the equity and importance of what we each bought to the table.

This was not to last long…as we welcomed the Global Financial Crisis, the affects of which were taking hold and felt long before it arrived, and the ripple affect continues to this day.

Partnerships gave way to Competition between services, alongside a purchaser-provider relationship between government and service providers.  The language in Service Agreements and contracts with government reflected this. Interactions with governmet representatives started to include words like “investment in community” “government investment choices” “government is the purchaser of providers” “outputs” and “benchmarked unit costing” … and so on… .

The relationships became competitive and transactional.

Competition – the act of competing; rivalry for supremacy, a prize;a contest for some prize, honor, or advantage.

Transactional – something that is transacted, esp a business deal or negotiation; the act of transacting or the state of being transacted.

Services became competitors. Service providers started to retract from each other, as they reacted to the notion of scarce government resources and the shifting relationship dynamics.

Effeciency; outputs; scarcity . The focus was quickly shifting from serving people to inputs and outputs –  dollars and numbers.

It is not easy to maintain partnerships or collaborations when trust is diminshed and replaced by a mindset of lack, scarcity, competition and commodity-like transactions.

The erosion of trust has led to a fight for survival.  Competing for government contracts and “investment” decisions based on a perceived ‘value for money’ that has little to do with true value and a lot to do with standardised one-size fits all inadequate funding equations and benchmarks designed to serve budgets, not people.

As we continue to move through major systemic changes, such as the NDIS, there is a further strengthening of the competitive market. Services are being told to behave more like our for-profit cousins, and the survival mentality ramps up.  Decisions take on a preservation focus rather than the degree of positive impact to be gained for those we exist to serve.

However, eventually, over time, such new funding reforms will see the pendulum swing and the cycle rotate.  Where survival will rest with those who focus on people, deliver quality and build high levels of TRUST within their services, their communities, and with those that they exist to serve.

More than ever before the not for profit and community sector not only craves, but desperately needs,  leaders and leadership that fosters TRUST.

But how? How do you avoid being a victim of, or perpetrator in, broken trust as a not-for-profit leader?

You start within, and work your way outwards.

Start with yourself, and become a vehicle in building a culture of trust with your team and organisation.  Your team are then equipped to build greater trust with those the organisation serves.  Your community benefits, your relationships strengthen, and the impact ripples, and reaches beyond and outward.

My top 5 tips on how to build TRUST and move your organisation forward are to :

These may seem simplistic. However, they are far from easy to implement.  The value of trust is such that it takes a great deal of time and lived experience to build, and very little to diminish or destroy, and even longer to re-build.

As a leader in your not-for-profit it all starts with “knowing thy self” – trust in yourself.

To learn more about building trust in your not-for-profit and as a NFP leader, please contact me.